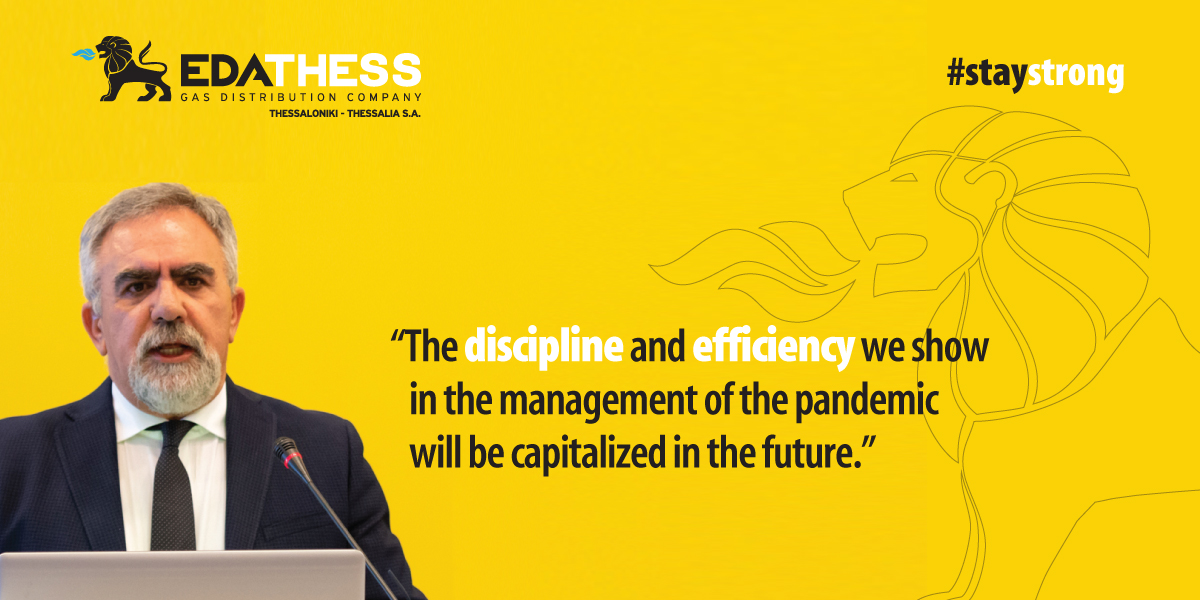 In an interview with energypress, the General Manager, Leonidas Bakouras referred to the actions of EDA THESS in dealing with the health crisis.

As he said, the company kept customer service offices open in all cities, proceeded to the electronic application for many services and ensured the 100% operation and maintenance of its network. Moreover, he stressed with regard to this crisis that "we have proved that we are much better than we ourselves perhaps believed and that makes me optimistic."

At the same time, Mr Bakouras stated that EDA THESS has shown from the first moment and in practice its support, with donations to all municipalities, hospitals and the Authorities of Thessaloniki and Thessaly, the areas in which it professionally operates.

There is no doubt that the pandemic has affected and will likely affect for a long time to come all sectors of the economy, and consequently the energy sector. In the face of this unprecedented international situation, I dare say that EDA THESS did not face major problems in its operation. This is because we took all the necessary measures from the beginning and took care to shield the company, its shareholders and consumers against any unforeseen circumstance, ensuring the smooth operation and uninterrupted provision of distribution services.

From the first moment, we made sure to be one step ahead of the developments. Of course, we have set the health of the employees in EDA THESS, the partners and the citizens as the main priority, taking all the appropriate measures. We have kept the customer service offices open in all cities, we have implemented the electronic application for many of our services and we have ensured the 100% operation and maintenance of our network.

As Ι said earlier, the coronavirus crisis affects all the sectors of the economy. In our country, however, there are no conditions in the energy market that justify fears. I consider that even though there is a curbing in the developments concerning the energy market (e.g. privatisations, etc.) this is a short-term phenomenon. In general, I am optimistic, and my optimism is based on the fact that Greece took care to organise early its defence against this new crisis.

Serious analysts, both in Greece and internationally, are preparing us for a particularly difficult period in the global economy. In Greece, the problems are expected to be more intense, given that, firstly, the country had just recovered from the economic crisis that had afflicted it in previous years, and secondly, that tourism, which had almost kept our economy standing during this period, will have almost negative participation in the national product this year.

I want to believe that, despite this, there is room for optimism. On the one hand, because our country has managed, with unprecedented discipline, to withstand the decade of economic crisis and to succeed, and on the other hand, because it is now proved that our behaviour all this time was not circumstantial. This is demonstrated by the discipline with which we complied with the measures the Greek government took decisively and immediately, something that is rewarded with flattering comments worldwide.

The discipline of us all, but also the effectiveness of the Greek government both in management of the pandemic and regarding the refugee flows, which is another serious international issue, send a resounding message of stability that can be capitalised on in the future.

It is therefore expected that in the near future, markets and investors from abroad will show in action their confidence in the Greek economy.

I conclude - and I am proud of that - that we ha have proved to be much better than we ourselves perhaps believed, and that makes me optimistic.

We steadily continue our course, which, after all, is based diachronically on very strong and positive economic results. The five-year development program that we have submitted for approval to the Regulatory Authority for Energy (RAE) includes investments worth €140 million in Thessaloniki and Thessaly, with a total increase of the penetration rate in the population at 74% in the areas of the License, and my estimate is that there will be no deviations.

The solid foundations we have laid for the development of the company and the effective management guarantee the implementation of all the planned investments for 2020, strong profitability and continuation of this course until the end of its License, in 2043.

A national priority in this difficult situation is to ensure the smooth operation of transport and distribution networks, without which the economy and society cannot function. Our cooperation with the State has been and remains excellent even now that our country is experiencing this unprecedented crisis. Do not forget that EDA THESS has been characterised by the political leadership as "a model company for cooperation between the State and the private sector".

Absolutely! Not only did the business community defended its operational role with consistency under difficult conditions, but it also showed its social aspect by offering great support to health structures, but also in general. In fact,               EDA THESS expressed its support from the very beginning in practice, with donations to all the Municipalities, hospitals and Authorities of Thessaloniki and Thessaly, namely the areas in which it professionally operates.

It is true that the European Union did not react immediately. However, the agreement at the recent Eurogroup -although it is not as satisfactory as desired by the countries that took the initiative to ask for the eurobond issuance- leaves room for optimism about the widening of the European package of economic aid.

I hope that the European Council of the European leaders on 23 April will be more generous and will be the start of a Europe of solidarity, which is now more necessary than ever for the peoples of the Old Continent.

It would be “myopic behaviour” if someone did not highlight the absence of “international leadership” that characterises today’s world. One can vividly see this shortcoming in the frivolity with which the US and British governments initially dealt with the pandemic. But also, in the weakness of the European Union leaders to immediately respond to the request for the tackling of the pandemic’s economic consequences.

Can the current crisis yield results? I want to believe that it can, if the societies that see this problem threatening their prosperity evaluate correctly the leaderships and the way they should react, with speed and effectiveness, in the management of problems with global dimensions.

I am optimistic that the current crisis will be addressed by all of us, collectively, in the framework of a global solidarity.

However, the priority of every leadership after the end of this crisis is the continuation of the cooperation between the State and the scientific community, the dynamic support of investments in the National Health System (ESY) on new stable and effective foundations, but also generally investments for the growth and boosting of economy.