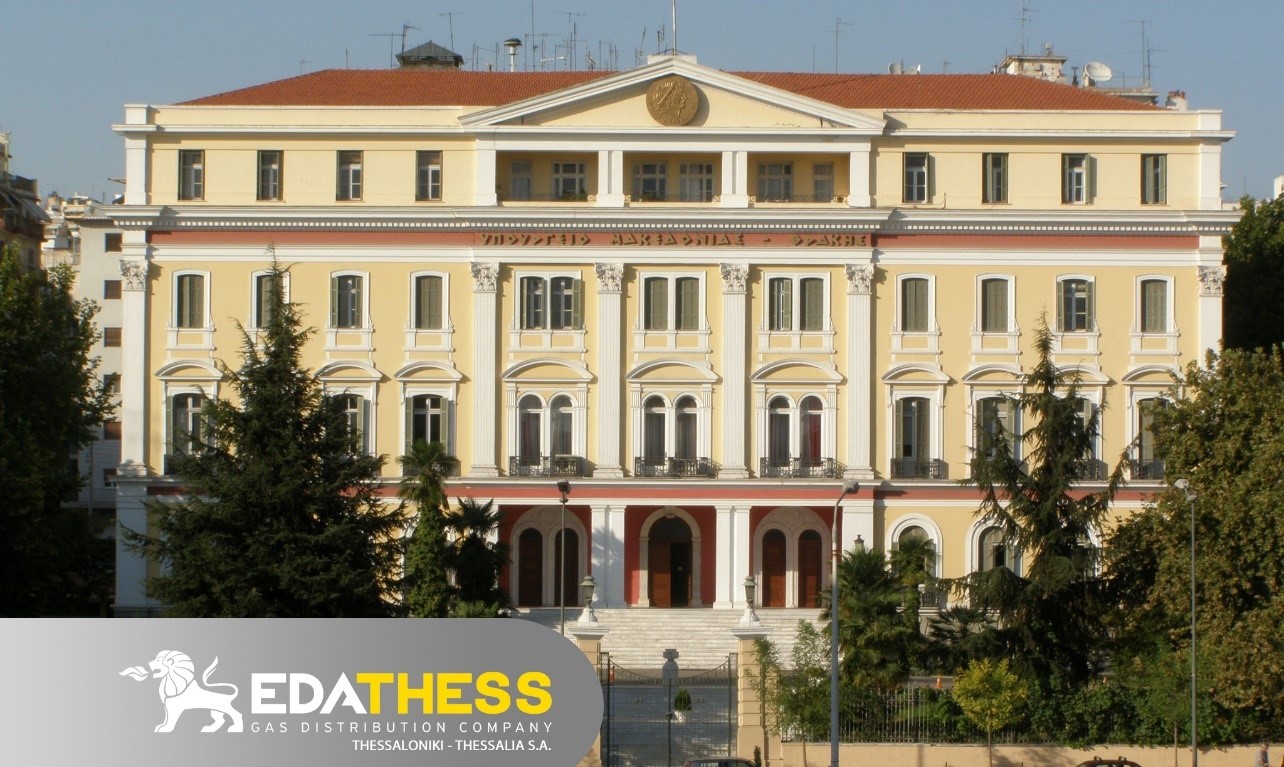 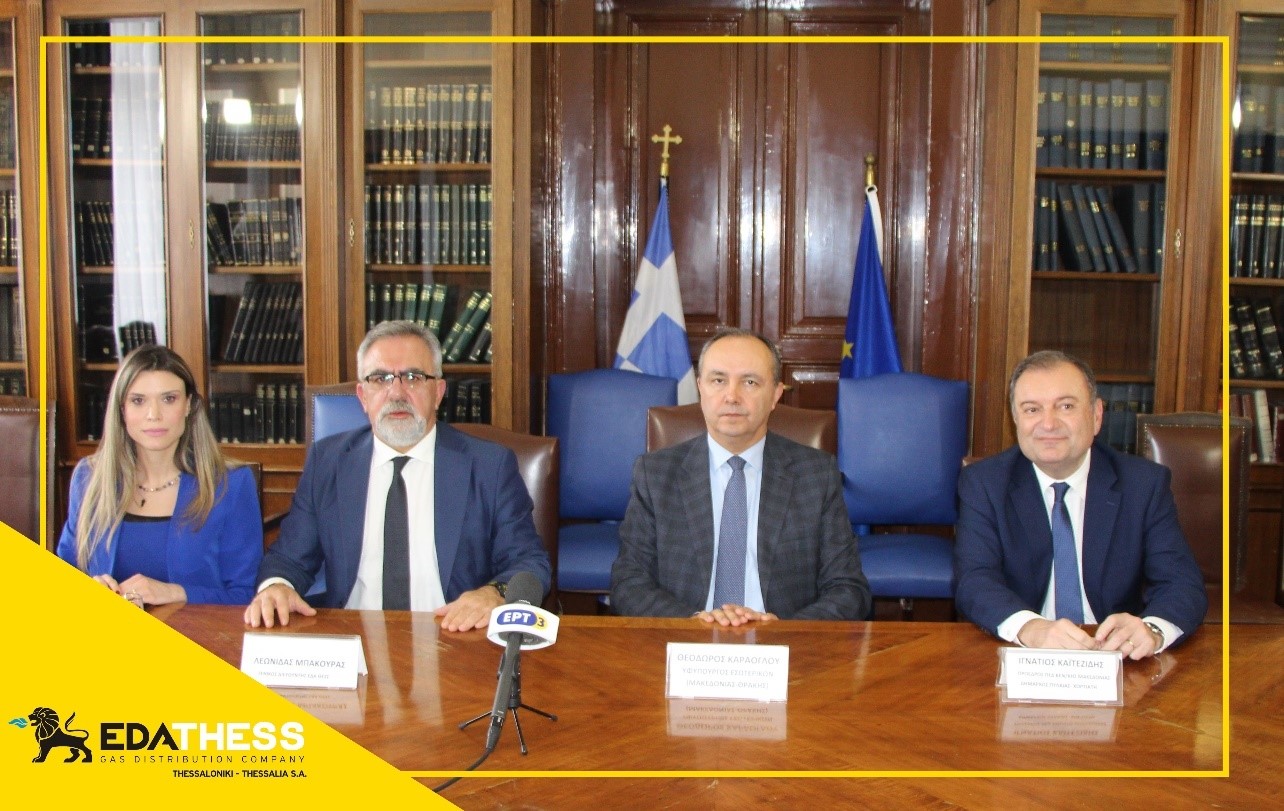 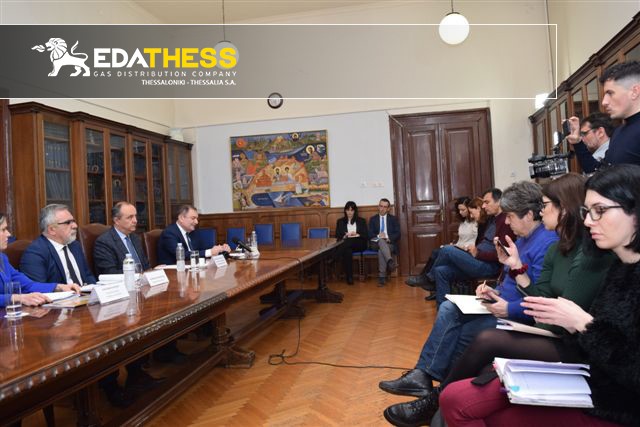 The 5-year Natural Gas Expansion Program and the favorable prospects for the development of EDA THESS constituted the key subjects of the meeting at the Ministry of Macedonia – Thrace, between the Minister of Macedonia – Thrace Mr. Theodoros Karaoglou, the President of the Regional Association of Municipalities of Thessaloniki - Mayor of Pilea – Chortiatis, Mr. Ignatios Kaitezidis, the General Manager of EDA THESS, Mr. Leonidas Bakouras and the Manager of Corporate Affairs, Mrs. Aikaterini Stachtari.

The Minister welcomed the attendees and made a brief reference to the country's economic climate. He noted that favorable conditions have been created for the attraction of investments by providing incentives to businesses to implement their investment programs. He expressed the state’s intention to support companies, such as EDA THESS, that carry out large-scale investment programs with stability and consistency, while strengthening, in return, the pillars of the national economy. The Italian colossal energy company ENI, EDA THESS’ shareholder, even in times of economic recession continued and continues to invest in the country, supporting our economy. At the same time, EDA THESS is paying high dividends, the dividends distributed in shareholders only for 2019 amounted to €20 m, but also enhancing government revenues.

Mr. Karaoglou added that EDA THESS is a pole of attraction for investors in the context of privatization, by achieving robust results through the management of an efficient network. Moreover, he emphasized the quality that characterizes Company`s operations in organization, professionalism and high know-how.

"Words come and pass away, but works remain, and EDA THESS has been talking exclusively through its works"  stressed the Minister of Macedonia - Thrace, who referred to the "successful and upward course of the Company", describing it as "Leader in the field of Energy" because, as he added, "the Company has gained consumers’ confidence and is running at high speeds with unobstructed growth, planning new investments and new jobs. That`s why in 2019 a record number of new connections was achieved, reaching 25,000, while a new record for 2020 is anticipated, so that gas flames lit everywhere"

Finally, he mentioned that "the energy routes created in Northern Greece lead to sustainable economic growth but also green growth, with gas being an integral part of the national energy strategy…".

For his part, Mr. Kaitezidis praised the beneficial cooperation between local authorities and EDA THESS and stated that "we, the local government, are benefiting from the Company’s actions". He commented on the high penetration rate of natural gas in the Prefecture of Thessaloniki and pointed out that                 EDA THESS` distribution network today covers 13 Metropolitan Municipalities. He informed that almost all municipal buildings in the Region are supplied with gas, which results in a rationalized management cost, without burdening the municipal budget. At the same time, he emphasized the economic benefits and competitive advantages offered to the industry, as EDA THESS implements the lowest distribution tariffs in Greece. In addition, there are numerous benefits to households, especially in times where the use of an economical and environmentally friendly fuel is of paramount importance. Thus, natural gas generates strong interest from citizens and businesses, according to his personal testimony by observing the effects of its arrival in the city and especially in the municipality of Pilea - Chortiatis.

He also noted that throughout the operations of EDA THESS, no safety issues have arisen related to the use of gas. He particularly emphasized, that the timetables of the Company's modern infrastructure works are carried out earlier than the original programming, proving its consistency on proper programming.

Concluding his speech, he emphasized that “the Company has rightfully gained the market of Thessaloniki by providing high quality services to citizens and responding rapidly to consumers’ demands in the Areas of its License. From our responsibility status, we support the implementation of the Company`s Development Program, a program that local communities are so in need of”.

Mrs. Stachtari developed EDA THESS’ social responsibility strategy, stressing that the Company monitors sustainability indicators and conducts an annual Corporate Social Responsibility plan, implementing a multidimensional project. The pillars upon which this strategy is structured are the market, human resources, society and the environment, with the aim of improving the living conditions of citizens and the well-being of future generations. In this context, the Company is responsible for health and safety issues, implementing all precautionary measures to achieve its objectives.

For his part, the General Manager of EDA THESS, Mr. Bakouras, thanked both the Minister and the President of the RAMT for the support they have provided to the Company over the years and once again stressed that “the key to success for a public utility company, is to have satisfied shareholders, staff and, above all, consumers". He then briefed the participants on the ambitious EDA THESS Development Plan 2020 - 2024, according to which investments in network infrastructure and new connections of € 140 million will be made.

Finally, the General Manager emphasized that with the implementation of the Program, the penetration of natural gas into the areas of responsibility will surpass 74% and the activated meters will exceed 450 thousand. At the conclusion of the meeting he underlined that "the Company steadily continues to invest and supports the Greek economy, by having a strong capital base, high know-how and an effective management model".